I grown up watching movies like Casino, Boogie Nights, Taxidriver Donnie Brasco or Serpico. When I saw pictures from sets of American Hustle, my heart went crazy. I just love the aesthetics of american 70s, the fashion, the huge cars and especially the colours. I chose American Hustle as first of Academy Awards nominated movie to look behind the camera and talk a little bit about its aesthetics.

Story of American Hustle takes place in late 70s in NYC. As production designer Judy Becker states, its not the same New York as in Taxi driver. It is the world of upper middle class, not world of homeless people, shady existences. Its more clean, more bright, more colourful. It is the world Becker remembers from her childhood as she explains:

“All my earlier sense memories were of Manhattan and Brooklyn in the 1970s – visits to museums and restaurants, coffee shops and the Plaza Palm Court with my parents, visits to my relatives in Sheepshead Bay in Brooklyn, people who were very similar to the Polito family in the movie…”

Becker stressed this out to her team and as general reference chose the film The King of Comedy (1982). King of Comedy takes place in the same place and time so for Judy Becker it was an obvious choice when she wanted to tell a story in different way than people are used to, but was also a bit of challenge to achieve this effect with budget of $40 million.

Director David O. Russell worked with Judy Becker already on two movies in past so they know each other well. Russell is famous for his empathy over characters and Becker claims they share this approach.  When she was offered the job, she paired with set decorator Heather Loeffler and art director Jesse Rosenthal and formed the team she worked with on Silver Linings Playbook.

Dop Linus Sandgren and Russell decided to shoot a lot of scenes with steadycam and use 360 degrees of the set. That pretty much established the style of the movie and also put very high demands on the art department. This decision almost eliminated possibility of shooting on locations as is, because even if you are able to find untouched interiors from 70s, this approach is very much demanding on proportions of sets, lighting and surroundings. Most parts of sets in American Hustle are either built in locations in Massachusetts, near Boston (in abandoned buildings, warehouses etc.) or built on stages in Woburn (the Plaza hotel suites). This gave the production designer and DOP enough control to form sets so they support the camera movement. Lighting was in a huge scale provided with practical lights elaborated into the set.

The main characters of the story are not so different to each other and the sets are a proof of it. Of course the different characters have different styles of homes but for me all of them looks almost the same, except home of FBI agent Richie DiMaso who still lives with his mother in shady greyish and worn apartment. Becker supported all aesthetics of this movie on golden details and especially – patterns. I love patterns, I put them everywhere I can when I work (I know, sometimes its not good!), but I never pushed it so much to the limit as she did. And it looks awesome. On the other hand, sometimes it can distract the viewer so much, that you stop following whats happening and you are just wondering over the pattern shapes and colours. That is exactly the opposite to what Becker claims. Every set has at least 2 or 3 different patterns in it so sometimes in one take you can jump from one to different ones or overlapping them. Its bizarre, but its brilliant. If you (from some reason) don’t like patterns you will have such a hard time watching the movie. And when you think it cannot be more bizarre, boom, the scene in the back room of casino with painting of Miami beach with palm trees comes! (Victor Tellegio played by Robert DeNiro is from Miami, so it makes sense…) All these details just supports the weird and iconic era this movie is set in and the strange characters and it really works.

The props are either collected or recreated from the interior design magazines and you can find beautiful pieces of furniture in the sets. Especially the table in London Associates office, the TV in Sydney’s bedroom, the plaster works in corridors etc. The flat of Sydney was all built in studio to resemble the “White Brick” apartment buildings on Manhattan’s Upper East Side popular among single women in the 70’s and 80’s. This set was minimal and stylish with vintage parquet floor tiles with additional fabrication to match.” Probably because of its brightness and direct sunshine, this scenes looked like shot on real location the most of all, so it was kind of surprise for me. Well done.

The house of Irving was constructed in old ranch house. Art department basically recreated everything except the stone fireplace. Again, the use of patterns is just overwhelming. Walls of the bedroom are covered with really aggressive art-deco style black and gold patterns, but that does not stop set dressers to put even more aggressive floral pattern on the bed covers. Great! In other rooms you can see more decent floral patterns and huge joke is the baroque style interior of the saloon. 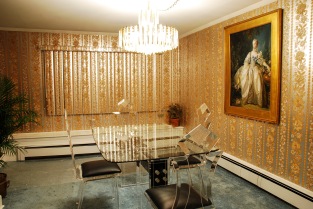 Becker used as reference for the movie old interior design magazines from 70s she bought on ebay for one hundred dollars and obviously it was worth it. As a foundation of colour scheme there is a palette of earthy or greyish colours always accompanied with some warmer or complementary colours as she recalls:

“I suggested that we go against the grain a little bit. Many period movies set in the ’70s use a similar palette of mustard, orange, olive or avocado green and blue. We avoided some of the colors to emphasize the later period we were portraying and the stylishness and aspirational qualities of the characters so we agreed on a palette that would emphasize the spectrum of yellows and gold and blues, with many neutrals (brown and metallics).”

When I say always its not exactly true. To separate worlds of the hustlers (the good guys!) and the FBI agents (the bad guys in the story), there are basically no bright colours in the FBI offices and the interrogation room is completely white. When you throw Amy Adams into the white hole in her beautiful azure dress you immediately create contrast between those two worlds. This is fact that every good production designer is aware, colours matters a lot and with smart use of them you can tell story and create impact to the audience much better. I will get back to the patterns because they work very well in every scene except the Plaza hotel suite. I think the colours of patterns on the walls here are too contrast and drags way much attention, in combination with emptiness of the space in those scenes I think the set dressing could be made with bigger empathy.

You could basically divide locations by colours. The earthy brownish colours in the sets of Irving’s art dealer office are simply great and the pattern repeating on the curtains is a nice detail. Really significant set with its graphical solution is the bedroom of Sydney Prosser with its highly saturated yellow wall and bed, the whole apartment is really bright and yellowish. The house of Irwing is darker, reddish with darker wood and heavy red curtains. Then the official spaces of FBI and offices are colourless, greyish without empathy to one or more colours.

Another beautiful example of the difference between the two worlds that hustlers and FBI agents represents (besides the differences between the colour charts) is the listening device operation room set up in a bathroom of Plaza suite. This bright, pseudo baroque interior with nice pattern (again!!!) on the wall just being invaded by huge black brick of tape recorder and TV.

The costume design deserves its own article. I just want to say that Michael Wilkinson did incredible work on the fashion. There are some fast editing moments that express how dramatic time flows, therefore you can see Christian Bale in three different suits in no more than three seconds. And of course one suit is better than the other. I would just choose at least one dress for Amy Adams that has different cut. Don’t take me bad, its beautiful, but it gets kind of boring! The assemblage of velvet, fur, golden chains and watches, Cazal sunglasses (no Ray Bans though??), suits with obvious patterns (again!) and crazy combinations of ties just perfectly connects with the production design and characters and you can really see how it actually helps actors to feel in their roles. 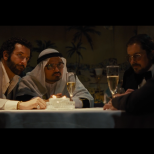 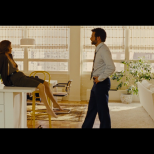