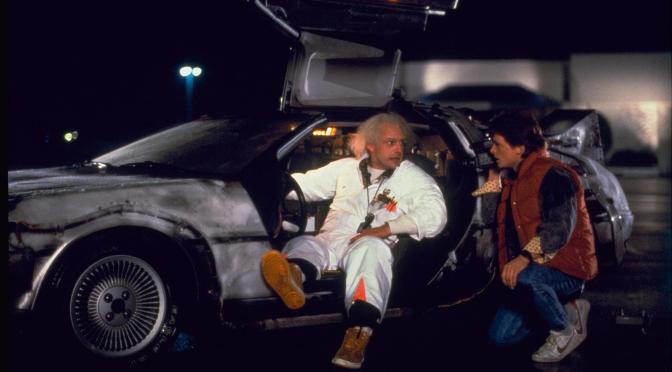 I guess I dont have to introduce this iconic film released in 1985 under direction of Robert Zemeckis, designed by one of the best production designers ever – Lawrence G. Paull. One of the most significant movie vehicle was designed for this series: Back to the Future’s DeLorean.

Period movies are always challenge for production designers as much as fun. When you are about to connect 50s, 80s and near future – it sounds like a lot of fun.

Motive of time, clock and time traveling goes through all the story of Back to the Future. Obviously, its the main plot, but even in the brilliant opening sequence, that was created like one continuous storytelling shot, you can see importance of time for dr. Emmett Brown and get introduced to the story just with props and set dressing of Brown’s lab.

Besides all the gadgets dr. Brown has in his house in 80s or all the useless inventions in 50s, the thing that interests us the most is obviously the DeLorean time machine. Production designer Larry Paull and executive producer Steven Spielberg hired veteran of movie design, former Disney animator, concept artist Ron Cobb, man who stands behind designs for movies such as Alien, Star Wars, Indiana Jones and others.

Cobb was already given some preproduction sketches by his colleague Andrew Probert, who got to the project as illustrator earlier, and a foundation that time machine has to stand on – DeLorean car. However fact, that time machine should be a car was not so obvious from the very beginning of preproduction. In early stages of the script, time machine was actual chamber or even a refrigerator. Decision, that it should be moveable lead to the final decision of making it as a cool nice sports car. Director was struck with an idea, that this car should have gull wings door. First, they were considering using Mercedes Benz 300SL, but budget reasons forced them to switch to DeLorean, that was cheaper and had totally different design. This car was not believed to be a good piece of technical equipment for the price it was being sold, however had already quite strange and futuristic design with its stainless steel body.

In this gallery you can see development process of DeLorean how it went from early point to finished car by Ron Cobb and Andrew Probert. 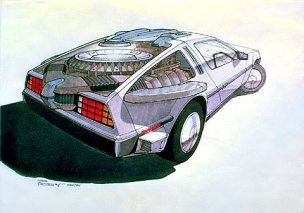 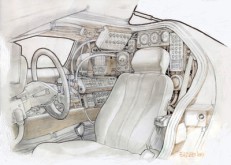 Universal Studios hired Filmtrix company to actually produce the car based on designs by Cobb. They ordered three cars, each of them was needed for different shots. “A” car was the hero car, used in most shots with all functional electricity circuits. “B” car looked the same, but was used at stunts and special effects shots with rigging mechanisms. “C” car had dressed just interior and was cut in half to be able to shoot interior shots and inserts in it. Filmtrix managed to deliver all three cars in 10 weeks for price about 150 000 usd. Price of one DeLorean DMC12 car, was set around 12000 usd.

Cobb’s initial idea for DeLorean time machine was pretty much simple and comes from the script. Since Brown probably did all this machine in his lab, with his hands, it should look rough,  improvised, on surface of the car. Spielberg, who was the executive producer of the movie liked the idea and from here it kicked of. Because of time and budget issues, parts were not made from scratch. Various parts were bought or put together to resemble Cobb’s designs and mounted on the car. During later stages of developments, the design of exterior of the car changed a bit from Cobb’s designs, it became more sleek, less DIY, but still Cobb’s work was pretty obvious. When DeLoreans were delivered to the workshops, Cobb took photographies, traced them and started adding elements on top of the original structure. The most significant part of the time machine – the Flux capacitor, part that justifies the whole time traveling method, was however not designed by Cobb. As Ron says in one of interviews, Flux capacitor was probably designed by someone in the Filmtrix workshop:

Yeah it probably was, probably a last minute thing. What happens a lot in film is something like that is a key device and no one could make up their mind. They keep saying, “try it again,” “try it again,” “that’s not it,” “ no that’s not it”, and so sometimes you can’t get it till the very last minute and you just have to grab the last design and use it whether it is right or not.

Actual drafting and designing time machine could take him 2-3 weeks of time. After his job was done, Andrew Probert changed some of the designs based of Zemeckis’s notes.

“When he (Cobb) left, the producers liked most of what Ron had put together but didn’t feel the design was complete. They reviewed my sketches and Steven suggested that I should continue the process, using Ron’s ideas as a basis.”

Interesting part is, that Cobb never saw the finished machine on his own eyes. One more significant contribution of Cobb’s mind for the movie was the actual form of time travel. His concept was to surround the car with magnetic field created by attached coils, send it somewhere out of space and time and pop it back whenever the driver wanted. Thats where the frost on car comes from, he thought it would add to the creepiness of “God where are they?”

As a result of Back to the Future design, John DeLorean, founder of the company DMC, invited Cobb to join his design team. However that was before DeLorean was charged in drugs related case and before DMC went bankrupt caused by poor selling numbers of overpriced DMC12. Cobb never joined the team.

However Back to the Future is not just about the DeLorean. Paull made enormous amount of work on designing the 80s and 50s Hill Valley town. Universal Studios were actually thinking about shooting scenes of town Hill Valley on location in California, however transforming an actual 80s town into year 1955 would just need to change so many details and would cost more money than to actually build the town on Universal backlot. Paull asked Universal Studios research department to bring him all Life magazine, Look Magazine and other photo references from 50s. He later choose some pictures that served as a mood inspirations for whole movie. The same sets were recreated for 2nd movie and remains in Universal Studios with some modifications until now. 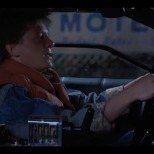 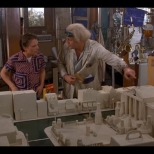 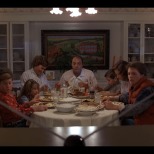 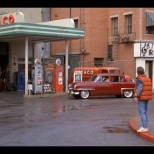 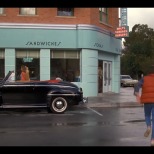 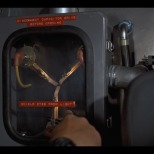 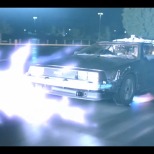 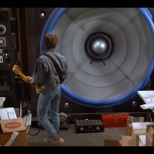 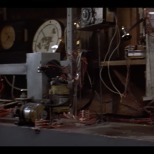 Another fun job to do for production designer on Back to the Future was for sure designing labs of dr. Brown in both 50s and 80s. Significant mind reading helmet was actually based on photo from 50s Life magazine’s topic on women hairdressers.

This doesnt really concert production design, but I want to mention it, because from this phase of preproduction come first design of DeLorean. Illustrator and storyboard artist Andrew Probert was hired as one of the first to work on storyboards, where he actually had to present version of time machine. In this version of ending, Marty is sent back to year 1985 with help of atomic test explosion. This version of script must have been really early, because when Paull and Cobb came to the project it was already out of table and none of them recalls informations about the atomic explosion.

Back to the Future was 1985 #1 box office movie. I would say not just because of great script, that went through about 40 drafts, but also because of iconic production design by Larry Paull and DeLorean design by Ron Cobb. I just always wonder where Libyan terrorists get that fancy VW camper! Of course it was decision of art department – and a good one, it doesn’t have to always make sense, important is, that it fits!

Back to the Future: 25th Anniversary Trilogy

Back to the Future behind the scenes:

Back to the Future set design:

Interesting video on comparing the locations to the look in movie:

One thought on “Back to the Future”